Kristian Evju was born in 1980 in Kongsberg, Norway.
He studied painting and drawing at Edinburgh College of Art, Edinburgh, and Chelsea College of Art, London from where he graduated in 2011.
He is best known for making enigmatic and unpredictable graphite drawings and paintings based on project-specific historical photography. He received the Conté à Paris Drawing Prize at Griffin Gallery, and the Painter-Stainers Prize for Drawing in 2016, and he represented Britain in the Prix Canson Works on Paper in 2015. He was also awarded the  Debutante Award at the National Annual Autumn Exhibition of the Arts in Oslo, first prize at Juvenarte, and he won NorskArt as a student in 2007.
Evju has been exhibiting and lecturing in Pakistan, Italy, Germany, Norway, USA and UK. Solo exhibitions include Arusha Gallery, Edinburgh (2018), Venet-Haus Galerie, Neu-Ulm (2017/14) Galleri Semmingsen, Oslo (2017), Telemarksgalleriet/Lysbuen Museum of Art, Notodden (2015) KHÅK Kunsthall, Ålesund (2015), and Gallery 39K, Lahore (2013). He was represented at the 7th Drawing Biennale, Eislingen (2016) and he published the book Fingerpflanzen in collaboration with EU Literature Prize (2012) winner Anna Kim at Topalian & Milani (2017).
His work has been featured in numerous printed and online publications, including the
Nu-Mode Magazine (New York), The Times (London), The Scotsman (Edinburgh), The Friday Times of Pakistan (Lahore), Norwegian Financial Times (Oslo), Beautiful Bizarre Magazine (online), Widewalls (online), Empty Kingdom (online) and The Artist Magazine (UK). 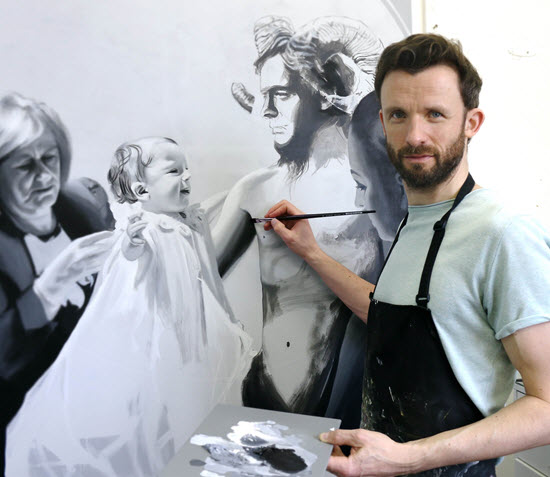